My Family from Ludge by Carol Berman

Hello!  My name is Carol Berman.  I live in Livingston, NJ with my husband, Richard and our two sons, Steven and Joshua.

I am very impressed with the curriculum at ORT school in Odessa.  The technology taught and the students' involvement is exciting for the future of Odessa, Ukraine, and the world.  I wish for all the students in ORT school luck, love and happy life!


My Mom, Selma Ruth Krimins Berman, and her relatives are from Russia. Our lineage in Russia goes back 5 generations to Bubba Sussa Ruda.  Bubba Sussa had 3children, Esther, Mosh and Fanny who is my Great Great Grandmother.  Fanny married Davis Brown (also from Russia) who was a wallpaper hanger and painter.  Fanny and Davis had  7 children - Ethel, Morris, Bob, Leon, Nat, Anne and Golda (Gertrude) my Grandmother.

I'd like to tell you about my Father's side of our family who were from Ludge Poland where my Great Great Grandfather, Rabbi Zusblatt lived with his Wife Hannah.  They had a child named Binyamin (Benjamin or Yuma) who grew up and married Malka, also from Ludge.  Benjamin, (who had been in the Russian army despite being blind in one eye) ran into a bit of trouble with two Russian Cossacks one night while out walking with Malka.  When Benjamin told his father of the trouble that night his father told him to shave his beard (shocking in the day for a Rabbi to tell his Son to shave his beard) and go to America out of fear for his safety.  Benjamin walked from Ludge, Poland to France.  There Benjamin took a boat to Ellis Island and began living in Paterson, NJ with friends and family from Ludge, Poland.  Benjamin worked by day in a woolen mill separating his weekly pay into 3 piles:  1 pile of money was to bring Malka to America to be with him, 1 pile of money to purchase his own looms and 1 pile of money to live on which included purchasing silk to use on his loom to make bolts of fabric to sell in NYC.  Benjamin worked hard and after 2 years brought Malka to Paterson.  Benjamin and Malka had two children.  The oldest named Abraham (Benny) and their daughter, my Grandmother, Lena.  Below are pictures of (from left to right) Lena and her Husband Fred.  Fred's sister, Ethel Berman and Lena, Abraham (who became known as Benny) and Howard (my father's brother), Ethel and Martin, my Dad (Lena's son). 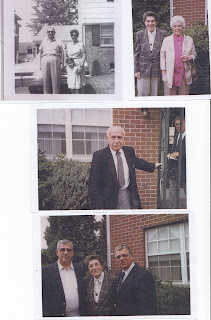 Yuma built a successful woolen mill business in Paterson, NJ named B. Zusblatt & Son.  After years he brought his son Abraham (Benny)  and daughter Lena's husband, Fred on as partners to take over the business.  Malka owned a little candy store in Paterson and while Yuma made fabric Malka sold candy and sundries to local workmen.   They lived happily surrounded by family and friends for many years. My father, Martin opened his own woolen mill (Yuma Woolen Mills named for his Grandfather, Benjamin) many years later.  Below is a picture of my father Martin and his family on his 75th birthday.  In the below picture is my father Martin (center) with his grandson's Steven and Joshua (my sons) on his knee.  He is surrounded by his brother, Howard, my brothers, Jacob and Benjamin, their children, Rachel, Eric, Samuel and Sarah, cousins, family and friends. 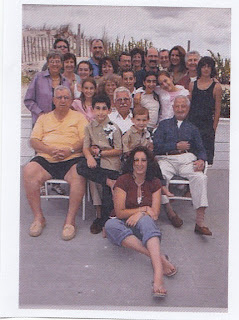 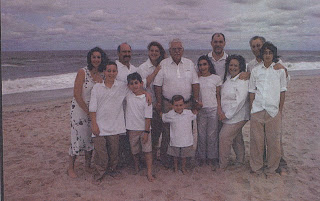