Hello, my name is Mira. This is the story of my father: David Cohen.
He was born in Tunisia, on Auguest, 13 1909.
When the Nazi's came to Tunisia they took the men of the family from home and brought them to be machine workers at a Nazi work camp.  David left at home his Wife, Georgette, who was pregnant with their second child.  No one knew where the Nazi's took David for six months.  When David returned home he told his family of his experiences during the six months in the labor camp.  David told his family that they worked all day long sewing bags for sand for use by the Nazi's when they were shooting their guns.  They were given no food, no water.  There was a LOT of illness and no medical help.  After six months the Nazi's left Tunisia and that is when David could return home to his family.  David felt very lucky to have survived 6 months in the work camp.  David watched lots of his friends die in Camp.  David came back to live with his family and had seven children of which I am the youngest.  David and family made Aliyah to Israel in 1956.  I was born and raised in Ofakim in the Negev where my family still lives.  David has 32 Grandchildren and was happy all his life.  David died in 2004.  Below is a picture of me and my father, David when I was 20 years old. 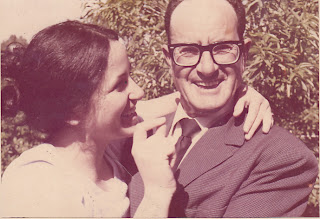